Writer Lü Gengsong (吕耿松) was released from the Xijiao Prison in Hangzhou on August 23, 2011, after serving a four-year sentence following a conviction for “inciting subversion of state power.” Lü is also subject to one year of deprivation of political rights following his release, which includes prohibitions on publishing and accepting interviews. 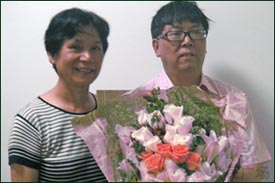 According to an informed source, after his release, when officials in Lü’s Neighborhood Committee asked him to sign a guarantee that he would abide by the conditions of deprivation of political rights, Lü refused to sign. In addition, he tore up his copy of a document specifying the terms of his “community correction” (社区矫正), correctional measures that should not have been applied to him. The source also said that the Xijiao Prison administration has not returned to Lü the six diaries he kept in prison and the manuscript of a book he wrote.

Lü is the author of the History of Corruption in the Communist Party of China (中共贪官污吏), published in 2000, and many articles on topics including corruption, organized crime, and freedom of religion. Lü was detained on August 24, 2007, on suspicion of “inciting subversion of state power” and “leaking state secrets” and convicted on the first count on February 5, 2008. In ruling against Lü, the court cited 19 articles which he posted on overseas websites and a total of 470 words from those articles as evidence of his crime. In total, Lu wrote more than 226 articles and more than one million words.

Lü graduated from Hangzhou University – now Zhejiang University – with a history degree in 1982. He once taught at a special training school for public security officers until 1993, when he was dismissed because of his activities in support of democratic reform. He was involved in rights defense activities such as reporting on the sentencing of Hangzhou eviction protester Yang Yunbiao (杨云彪).

Below is an English translation of the specific conditions placed on individuals subject to deprivation of political rights, excerpted from the Regulations on the Supervision and Administration by Public Security Organs of Criminals Who Have Been Put Under Surveillance, Deprived of Political Rights, Given Reprieve, Given Parole, or Released on Bail for Medical Treatment:

Article 12. Public security organs shall announce to the criminal whose political rights are being deprived that he must abide by the following provisions during the deprivation period: